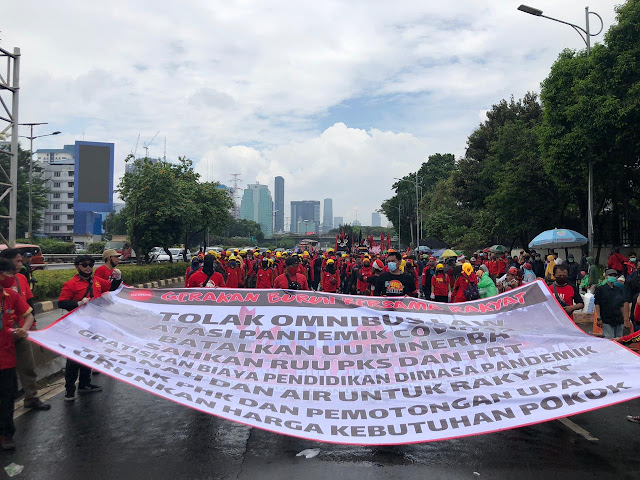 An alliance of trade unions and other social movements, Labor with the People Movement (Gebrak) held a rally last Thursday, July 16th to urge the lawmakers to cancel the Omnibus Law draft bill currently under deliberation. The lawmakers are deemed to pass on the widely-rejected draft bill amidst the Covid-19 outbreak.
The Gebrak alliance organized the protest action in several major cities in Indonesia. The protesters decided to organize the rally despite being aware of the infection risk. “The government and the lawmakers keep insisting to pass on the bill. With this, working people are forced to risking their life to protest the Omnibus Law. Both are taking advantage of the situation where most people are facing hardship,” said GEBRAK’s spokesperson Ilhamsyah.
In Jakarta, at least five thousand members of grassroots organizations in the alliance marched towards the House of Representatives complex in Senayan, Central Jakarta. The rally was staged not only in Jakarta, but also in other major cities in North Sumatra, Riau, South Sumatra, Yogyakarta, Makassar, Jambi, Surabaya and Lampung.
In different cities, the protesters also marched towards the Regional Legislative Council to voice out their refusal towards the draft bill. It is estimated that there were tens of thousands protesters, consisting of labor union, peasant union, students, and women joined the rally nationwide.
The alliance deemed that the so-called ‘trickle down economy’ promoted by the Omnibus Law is only an excuse for the oligarch to accumulate their wealth by impoverishing the majority of the working people. This motive can be seen from how the Omnibus Law will promote further cheap labor policy, flexible employment and environment destruction.
“How come the Omnibus Law could create jobs while at the same time giving so many power to the employer to easily lay off workers? The labor market flexibility is the same as the modern slavery for the workers. We work so hard but remain poor, because we work to enrich the capital owner,” said Nining Elitos, another Gebrak’s spokesperson.
On the other hand, the so-called new investment that will be brought by the Omnibus Law is considered to not necessarily create job opportunities. The data from Indonesia Investment Coordinating Board (BKPM) shows that between 2013 and 2019, the foreign investment has been growing, but with a negative correlation with job creation. In 2016, for example, the total of USD 28.96 billion foreign investment created jobs for the 951.939 workforce. Meanwhile in 2019, the bigger foreign investment of USD 29.31 billion created only 490.368 jobs.
The promise of foreign investment is also deemed to not result in transfer of technology, given Omnibus Law will reduce the current amount of minimum wages. “The cheap labor politics promoted by Omnibus Law will attract investment, not in the capital-intensive industry, but in the labor-intensive which exploits the cheap labor,” said Ellena Ekarahendy as the spokesperson of Gebrak from SINDIKASI trade union.
The draft bill which will simplify the investment licensing is also seen to be escalating the land conflict. The land that belongs to the peasant community, as their source of living and cultural life, will be under the threat of dispossession by the development project. “The Land Management Rights which allows 90 years of land concession by the corporation will enlarge the land ownership gap. Currently, there are only 1 percent of people controlling 68% of land assets,” said Dewi Kartika.
Not only protesting against the Omnibus Law, the Gebrak alliance also urge the parliament to start the deliberation of Elimination Towards Sexual Violence draft bill. This bill is important to protect the marginalized groups from sexual violence. In addition, the alliance also demanded the parliament to pass the Protection of Domestic Workers draft bill. This law should have among the first priority given many domestic workers are still trapped by human trafficking.
The Gebrak alliance also demanded for free university tuition during the pandemic. In this regard, Gebrak also protested the sanction imposed by Universitas Nasional(National University) towards students who were against the university’s policy on the tuition fee.
The rally staged by Gebrak gained support from global workers. World Federations of Trade Unions (WTFU) who have union members in 130 countries in 5 continents sent their support letter on July 15th. In their statement, WTFU fully supports the demand of Gebrak and other Indonesian working people in struggling against the Omnibus Law.
The demands of GEBRAK are as following:
1)      To cancel the deliberation of Omnibus Law draft bill without any exception
2)      The government should prioritize other draft bills which align with the interest of the majority of people, such Elimination Towards Sexual Violence and Protection of Domestic Workers draft bill
3)      To cancel the Mining law draft bill
4)      The government should prioritize the state budget and state role in battling Covid-19 pandemic and in handling the nationwide crises caused by the pandemic.
The Gebrak alliance is comprised of KASBI, KPBI, Konfederasi Serikat Nasional (KSN), Konsorsium Pembaruan Agraria (KPA), SINDIKASI, Solidaritas Pekerja Viva (SPV), Kesatuan Perjuangan Rakyat (KPR), dan Federasi Pekerja Pelabuhan Indonesia, LBH Jakarta, AEER, KPA, GMNI UKI, Aksi Kaum Muda Indonesia (AKMI), Federasi Pelajar Indonesia (Fijar), LMND DN, Badan Eksekutif Mahasiswa (BEM) Jentera, and other groups.
Original source: https://fbtpi.org/roda-perjuangan/medan-juang/cabut-ruu-omnibuslaw-ribuan-buruh-dan-mahasiswa-kepung-dpr/
Writer: Marulloh (FBTPI)