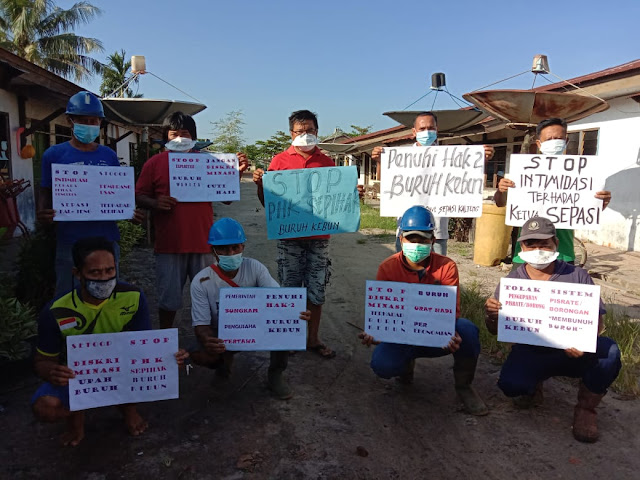 SPMN plantation workers protesting against the new wage calculation system and alleged union busting. Photo credit: SEPASI
The government of Indonesia has officially issued a ‘large-scale social restriction’, as a measure to prevent the spread of Covid-19. Such measure includes restriction on public activity and work activity at the workplace.
However, the instruction by the central government has not been implemented by many enterprises. It has been reported that a lot of companies are not following the instruction; they continue asking workers to go to work despite the risk of virus infection. In such situation, workers are facing much more difficulties as there the large-scale of social restriction policy has been applied.
Such difficulties are experienced by workers at PT. Sarana Prima Multi Niaga (SPMN), an oil palm plantation company, a supplier of Wilmar International located in Kotawaringin Timur in Central Kalimantan Province. The workers are currently protesting the changes of wage calculation system imposed by the company management. This protest was followed by the retrenchment of workers’ union (SEPASI) leader and several union members who are actively organising this protest.
With the applied social restriction policy, the workers and union cannot launch a protest action to raise public awareness about the labour rights violation done by the company. Worst still, the union cannot report the violation to the Labour Office, as the officers are having ‘work from home’ and they have not been responsive. The company is allegedly using the Covid-19 situation as a mean to impose a new lower wage payment system without a consultation with the workers. 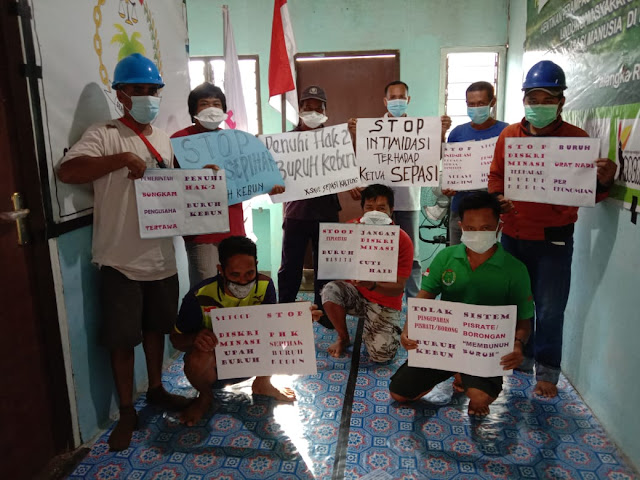 The labour dispute has begun since early 2018. In February 2018, the SPMN plantation workers had protested the unfavourable new wage policy. However, this protest was responded by the management by laying-off the protesters. There were about 405 workers, including the members and leaders of SEPASI union who got retrenched by the company between November 2018-February 2019. The SEPASI union had tried to submit a protest letter to the SPMN management and TSH Resources Group—as the company main group—to no avail.
Subsequently, the company released an internal memo containing a changing in the wage payment system for the supervisor of harvest workers. This new policy changes the payment from daily based wages to piece-rate based wages that will lower the real wages to be received by the supervisor.
Again, the union had tried to negotiate this issue in a bipartite meeting on 30 March 2020. However, there was no agreement in the negotiation, where the company keep insisting on their decision. The management argued that the policy is decided by the main company, the TSH Group.
After the meeting, the workers experienced a series of intimidation by the company. The supervisor workers who protest the new wage policy were forced to sign an agreement letter, stating that the workers agreed with the new policy and willing to be moved into different division if they object the policy.
On the following day, the workers organised a strike demanding the wage payment calculation to be returned to the previous policy, which was based on daily wages. However, this strike was responded by threat of retrenchment towards brother Subit, the SEPASI union leader. Subit is known for his dedication and persistence in advocating the rights of the workers. The company also threated to report Subit to the police for the allegation of pounding on table during the bipartite meeting.
On 15 April 2020, there was another round of bipartite meeting between the management and workers’ representative. The meeting was resulted in an agreement in favour of workers’ demand, where the company agreed to return the wage payment policy to the previous calculation. The company also promised to end the intimidation and threat towards workers and union leaders.
Nevertheless, the company broke their promises by sending a summon letter to Subit on 17 April. Subit did not respond to the letter as he considered that there was no clear basis for the company to summon him. On the following day, the company summoned Subit once again. Apparently, Subit was about to be retrenched in that meeting for the reason of pounding on the table during the previous bipartite meeting.
On 23 April 2020, the company officially announced the retrenchment of Subit, by citing an article in the Labour Law Act No. 13/2003, which states that the workers may be laid-off if a worker conducted a big mistake. However, it is important to note that such article has already been annulled by the Supreme Court in 2005, thus the management cannot use such article to fire a worker. 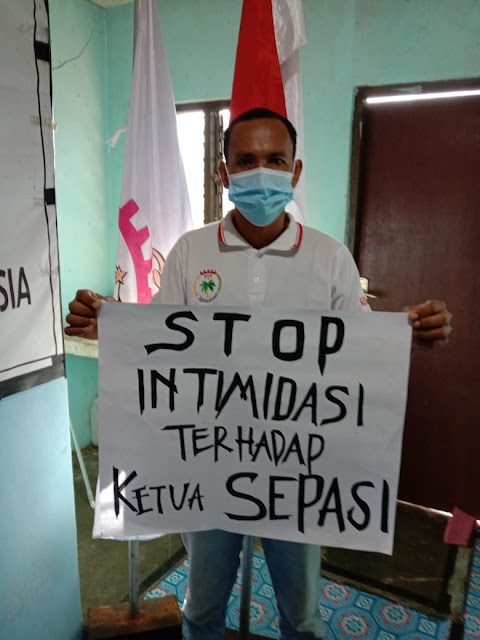