On last Tuesday, (21/07), workers members of FPBM-KASBI union in the palm oil plantation owned by PT. Nusa Indah Kalimantan Plantations (PT. NIKP) went on strike. The company, which its plantation located in Mukti Jaya village in East Kutai regency, West Kalimantan province, is accussed of not fulfilling workers’ rights, which as following:

2.      Not registering workers with the statutory health and employment insurance program (BPJS Ketenagakerjaan and BPJS Kesehatan)

8.      Not taking any responsibility when workers had a work accident.

10.  Requiring workers to pay for the working tools by wage deduction

Prior to the strike, workers and the union had tried to negotiate with the company several times. However, the company never responded to the workers’ demand. As the negotiation resulted in nothing, the workers then decided to stage the strike.

The strike was occurred within the plantation area and in front of company’s office. During the strike, the workers were guarded with security forces (police officers, military and company’s security officers). 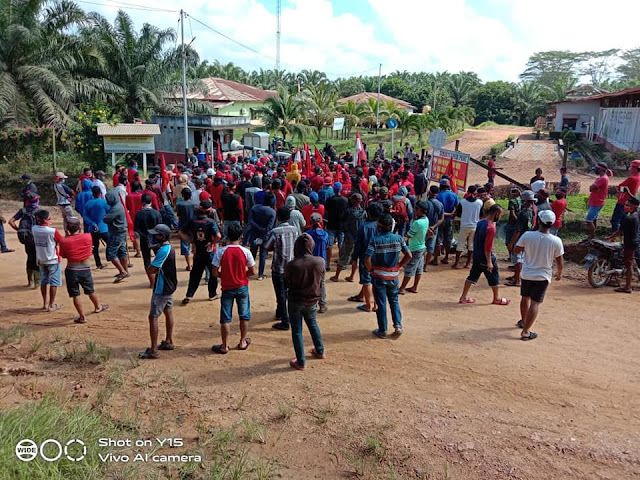 The workers managed to meet the company’s management. Nevertheless, the management explained that they could not make any decision, but waiting for the company’s CEO in Jakarta to decide on this matter. The CEO is said to be coming to the plantation on coming Thursday July 23rd.

As the negotiation, again, did not go based on expectation, the workers then decided to continue their strike action until July 29th. Workers were wishing for their demands to be accepted by the company.

Let us support workers’ effort to demand their own rights. Let us circulate this news so we can push the local government of East Kutai, the regional labor agency, and the company to act in favor of workers’ interest.