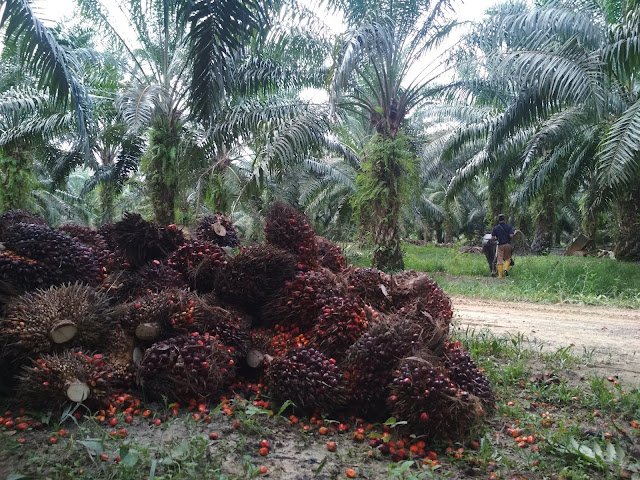 Photo: A pile of palm oil fruit bunches. Source: TPOLS
The Coalition of Oil Palm Workers (KBS) is calling on the government to come out with a regulation that specifically governs the rights and obligations of workers in the palm oil sector, saying that existing laws and regulations could not yet protect this labor force.
“A regulation that specifically arranges work relations in oil palm plantation should be seen as a serious effort by Indonesia to ascertain that the rights of workers are respected, protected and met,” the coalition said in a press statement received by The Palm Scribe Thursday (5/12).
The coalition deemed that Indonesian labor regulations are still weak in terms of protecting workers, especially in oil palm plantations.
“Current Indonesian labor regulations cannot accommodate differences in labor conditions especially between labor in the manufacturing sector and those in oil palm plantation,” it argued.
It said that the government should work to improve its labor system and place workers, including in the oil palm sector, as subjects that should be able to have a decent life.
The coalition said that Indonesia does have regulations on labor but they did not automatically protect workers as low wages, unclear work relations, muzzling of labor unions and the low level of protection of the safety and health of workers continued to be subjects of complaints from workers in the palm oil plantation sector.
It demanded that “the government issue policies to improve (the welfare) and protect oil palm plantation workers, including halting discriminatory practices against women workers.” KBS said that women, who were the majority of some 18 million workers in Indonesia’s oil palm plantations, were the first victims of the exploitative work system in oil palm plantations.
“Most women workers are working without obtaining their rights as workers, work certainty, work contracts, they get minimum wages as well as inadequate health protection,” the coalition said.
The coalition also demanded tight government supervision on the implementation of the labor regulation and the firm actions against any non-compliance by oil palm companies.
Besides calling on the government to ratify ILO Convention number 110 of 1958 on plantation and number 184 of 2001 on health and work safety in plantations, the coalition also wanted the financial institutions to firmly adopt and implement the principles of good governance and social responsibility by not extending loans to companies ignoring the rights of its workers and push corporations to adopt the principles as a requirement for partnership.
#palmoillaboursolidarity