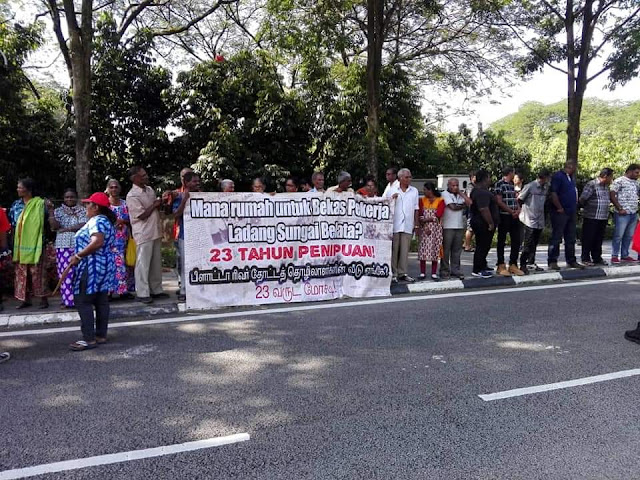 KUALA LUMPUR: A group of estate workers held a peaceful demonstration outside the Parliament building today to urge the government to enact an estate housing law to guarantee the workers permanent housing even after their contract ends.
The 200-plus plantation workers from across the country who gathered outside the building, carrying banners, were members of a coalition of NGOs called the Estate Society Support Committee (or Jawatankuasa Sokongan Masyarakat Ladang) which was set up in 1993 to fight for the rights of marginalised workers in plantations.
Speaking to reporters at the demonstration, its national coordinator, Karthiges Rajamanickam said estate workers were provided housing only during their contract period.
He said this was an issue as most retired estate workers could not even afford houses built under the ministry of housing and local government’s affordable housing scheme.
He added that some workers who had been promised houses, and signed contracts, ended up as victims of abandoned development projects.
“We started (fighting for house ownership) in 1973. It has been made a policy but until now, it has not been made law.”

“The last time we went to Parliament to pass a memorandum was in 1999. Now, after 20 years, we come here today to pass a memorandum to the new government to call on them to enact an Estate Housing Act as a guarantee of housing for estate workers.
“Build houses for them. Don’t force them to vacate once the contract is over. That is our demand.”
The memorandum was passed to Harinder Singh Malkit Singh, a special functions officer with the law minister in the Prime Minister’s Department.
Other demands include raising the minimum wage to RM1,800 and including estate workers in the development plans of the ministry of rural development.
S Arutchelvan of PSM, who was present, said estate workers were not regarded as a community or put under the purview of any ministry.
“For example, in rural areas, farmers and fisherman, are under the ministry of rural development. Their housing needs are taken care of, they have a community hall in their area and get other facilities and aid.
“We are asking the government not to treat estate workers as if it’s an employer-employee thing, but to treat them as a community.”
He noted that Malaysian companies were starting to set up plantations in Indonesia and Vietnam while local estates were shutting down. “They are neglecting the local workers who have been working at the estates for three or more generations.”